Is yet another boardroom war looming?

Last week’s online discussion between the CSA Interim Board chairman, judge Zak Yacoob, and the media provided a sobering reminder of the prevailing attitude of so many administrators towards the truth – and a worrying glimpse into the future. 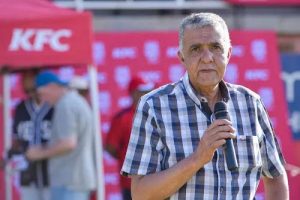 ihan Richards (pictured), the acting president of the CSA Members Council on the basis that he is the longest serving, was asked whether the hard but necessary decisions taken by the Interim Board would remain ‘binding’ once their provisional three-month term has expired.

“That is why we went the way of appointing the Interim Board as the board of CSA. It gives them certain powers and binds the company to their decisions,” Richards replied, momentarily promisingly.

“The decisions can be rescinded after the fact but that is not our intention. We specifically went that way to ensure that we can get cricket into a better space.” Less promising.

So – is the Members Council in support of the decisions taken so far, like suspending the company secretary and acting chief executive? [Kugnadrie Govender – pictured]

“The members have always said the space within which the board will operate is clearly defined on what they should deliver and this is agreed on by all the parties. At times we do question process and policy but I think we have found a very workable solution…because we should also (want) this process to run to a conclusion very swiftly,” Richards said.

The words were positive but untrue. We knew that because the majority of the Interim Board have exercised no restraint with the truth. They have been open about the difficulties they have experienced with the Members Council which, you may remember, reneged on its promise to the Sports Minister to officially sanction the Interim Board until strong-armed into doing so by the Minister.

Richards, like the majority of his colleagues in recent years, was speaking from an agreed agenda to an audience he had little regard for. Suddenly there was an interruption on the Zoom conference, which can be awkward with over 50 people involved. It was the judge.

The truth can be so damn inconvenient. Judges, especially ones who complete 15 years at the Constitutional Court, know that better than most. Unlike most, they have no fear or reason not to say so.

At which point another Interim Board Member, governance specialist Judith February, also spoke up:

“I would like to add that it is important, again, to make the distinction between the Members Council and the role of the Board. The Board is responsible for operations, on a point of clarity about what can and can’t be rescinded after we have left.”
It was the most tactful way possible to say that operational staff – like the company secretary and acting CEO – who were found to be in dereliction of their duties, could not be replaced once dismissed.

February’s second point was made with equal tact, but was considerably harder hitting:

“The other point to be made is obviously the Memorandum of Incorporation will be amended so there will be quite a different structure after the next AGM.”

In other words, the Members Council – comprising all of the provincial presidents – will formally become what it should always have been in the professional, multi-million rand era of the game. A largely honorary group of (mostly) men, elected into office by their provinces to which they are fiercely loyal, who host other dignitaries in their Presidential Suites during international matches and present trophies. While a board of lawyers, accountants, marketers and other professional businessmen and women run the game.

Will the Members Council agree to that? Judge Yacoob didn’t answer specifically, not publicly, but he didn’t need to. He has a way with words.

“The Members Council has the power to take a resolution to throw us all out tomorrow. Some people would say they are prevented from doing so because they would love this process to go on and to be properly completed. I am sure some people would love this process to go on and be properly completed. Others, I think, are actually struggling with the notion of the consequences of completing the proposal on the one hand, and the public consequences of firing us on the other,” Yacoob said.

The thought that “public consequences” are all that stand between the Members Council and a decision to undo all the positive work being done by the Interim Board is a grave concern.

“The public consequences might be serious,” said the judge, “and therefore I think that some of the people in Cricket South Africa at the moment are between the proverbial rock and a hard place.”

It required a few days to sink in, but reflection suggested that the man appointed to the highest court in the land by Nelson Mandela in 1998, might know something about cricket’s boardroom battles ahead that the rest of us don’t. We couldn’t have hoped for a better person to sort the mess out and complete the mandate of “restoring the integrity” of CSA and the game.