What will the ‘Greatest Final’ be remembered for?

For hours at a time when New Zealand were carefully picking their way through the invisible nettles en route to 241-8, and then again when England were trying desperately to keep hold of a half-set jelly, the tension amongst the crowd was the most palpable I have ever experienced – certainly for such a prolonged period of time.

As in the semi final against India, the Black Caps picked their number and ruthlessly refused to be dislodged from their pursuit of it. It was the same number against England – 240. Kane Williamson backed his bowlers and fielders to defend it and, as it happened, they did. 20 years ago South Africa were eliminated from the World Cup following a tie – New Zealand tied twice and still lost following the Super Over.

Never in the history of ICC events, or any high profile competition for that matter, has a team less deserved to finish runners up than New Zealand. They held their nerve as well as they held their catches. Time and time again when the intensity of the moment demanded that somebody, or something, should crack, it was not them. They had learned the lesson from the last final, four years ago, when the occasion was too much.

But somebody did crack. Kumar Dharmasena is not the first umpire to fail under the hottest spotlight the game can provide and, harsh as it may sound, he almost certainly cost New Zealand the World Cup. By now the details will be clear to all who are interested but, in case you missed them, here goes again.

As Stokes was desperately scrambling to get back for a second run in the final over. Martin Guptill’s throw ricocheted off his bat and down to the boundary for four overthrows. Instead of awarding five runs, however, Dharmasena ruled that Stokes and Adil Rashid and completed two runs before the ball reached the boundary – which they had not – and so awarded six.

Instead of requiring four runs from the final two deliveries England needed just three but, far more importantly, Stokes was back on strike instead of number 10 Rashid.

In years to come that single detail may be forgotten by the majority of those who watched it, buried under the breath-taking drama of one of the great sporting performances at one of the greatest theatres, but I won’t forget and I suspect Dharmasena won’t, either. Which is not to criticise one of game’s best umpires. Like most of us in those closing moments, he needed – and deserved – as much help as he could get.

It was a simple line decision. The first replay made it clear that the batsmen had not completed a second run. If the third umpire had been consulted he could have made his decision in under 30 seconds. For all the game’s laudable attempts to remove human error from the officiating process, it failed at the critical moment. Which is why it should continue to seek improvement.

While the ICC are at it, they may wish to revisit the radio broadcast situation. Their official ‘world feed’ was finally back up and running for the semi finals and the final but the preceding 10 days, including many of the best and most important group matches, were not heard as the wrangling over non payment of rights fees continued.

Ladies and Gents of the ICC, please note: The very vast majority of radio stations which broadcast sport are cash-strapped. They get by on shoestring budgets with minimal income. (I know, I get paid by them.) But that does not mean there aren’t hundreds of millions of people around the world keen to listen to sport – especially cricket.

The radio rights will never be one of your cash cows so please try to explain that to the Test playing nations at your next executive meeting. Try to explain that less cash for guaranteed delivery will do the game an infinitely greater service than a few hundred thousand more dollars now.

On a final, happy and personal note, I’d like to thank outgoing ICC Chief Executive, David Richardson, for his support and understanding regarding the (non) payment of the commentary teams fees and expenses. I can’t be certain what transpired behind closed doors but I’m pretty sure he was successful in persuading Channel 2 that it would be fine gesture to pay us. Which they have done.

Congratulations to Eoin Morgan and England. They didn’t actually beat New Zealand, but they are the best ODI team in the world and worthy World Cup champions. 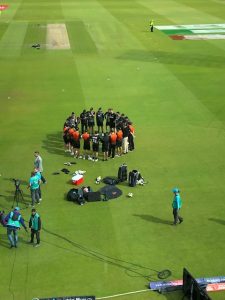 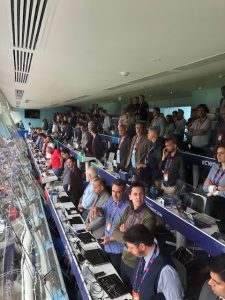 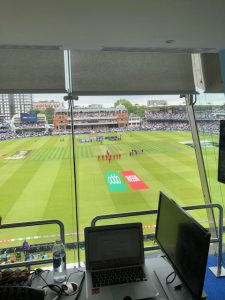 « Fans and Sports Stars
The Show goes on…with a struggle. »