Mother Cricket and the ‘The Line’

Remember ‘the line’? We haven’t heard much about it in the last year or so. The one which the Australian cricket team never crossed – the one they could draw wherever they liked to demarcate acceptable behaviour from the unacceptable.

Before ‘the line’ cricketers were guided by ‘Mother Cricket’ and the respect (or fear) they had for her. Mother Cricket, young cricketers are taught, dispenses justice with a fair and even hand but within a timeframe of her own choosing. And she is rarely in a rush although, occasionally, she will settle a score instantly.

It’s pretty basic stuff most of the time. A batsman who doesn’t walk for an obvious caught behind will, at some point, be given out when he’s missed it. There is more nuance in the payback Mother Cricket has for cricketers with bad or questionable attitudes, especially when it comes to disrespecting a senior player who has earned that right.

There were plenty of acerbic observations from many corners of the cricket playing world (including Australia) about exactly when the Australian cricket team appointed themselves guardian of ‘the line’ but it took Sandpapergate for at least two decades guardianship to unravel.

Two games before the Cape Town Test where Cameron Bancroft carried out David Warner’s instructions with the knowledge of captain Steve Smith, Quinton de Kock infamously crossed ‘the line’ with his Sonny Bill Williams comment to Warner (who never crossed the line once in a full two hours of ‘banter’ aimed at the Proteas wicket keeper).

It was the first Test of the series at Kingsmead and it was a nasty affair. There were plenty of unpleasant moments and comments on the field, from both sides, and it’s fair to say Australia were a little less than gracious in victory. It was, of course, the penultimate Test match contested by the ‘old Australian’ team before they were served largest collective slice of humble pie in the game’s history.

One of those moments came when Nathan Lyon completed a run out to dismiss AB de Villiers and then dropped the ball towards the great batsman’s head as he lay on the ground following a desperate dive to make his ground. He then offered him a few salty words.

Mother Cricket is mythical, naturally, a figment of players collective imagination. But she is also the reason the sport is littered with superstitions and quirks – more than most other sports. But if she did exist, and she really did have a habit of making players ‘pay’ in a similar way for their indiscretions, she would surely have, somehow, used a run out with Lyon.

When the incident happened at Kingsmead a former Proteas player instinctively said: “Whoa…that’s not good. That’s really not good… that’ll come back to bite him.” If he was an Aussie he would have said: “He’s crossed the line, there.”

It’s all nonsense, of course it is. But judging by the number of messages I received from former and current players it seems it was on their minds when Lyon fumbled the simplest of run out chances to dismiss Jack Leach and win the third Ashes Test at Headingley. 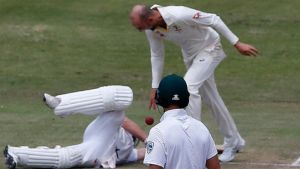 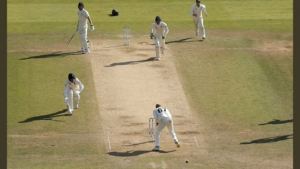