They are the game’s hidden men, a secret society of devoted hard-workers without whom there would be no cricket, at all, for anyone.

In Australia they started calling them ‘Curators’ a few years ago because it sounded more important but they still call themselves ‘groundsmen’ here and it seems appropriate because a more grounded group of men you would find hard to locate. Men of the earth.

I had no idea that they held an annual Conference but then why should I? They are a secret society!

Actually, they’re not secretive. ‘Private’ would be a better word to describe them as would dedicated, selfless, uncomplaining and almost always with a dry wit. When you work as hard as they do with as little recognition and thanks as they do, you need to know how to smile at the world.

Last year, Supersport Park’s winter outfield was spray-painted green for the August ODI against New Zealand. It did not work. This year, the entire outfield has been cut back to almost bare earth and reseeded with 1,200 kgs of cool-climate grass which is already flourishing. By August, when New Zealand return for their Test match, the outfield will be a lush, green mat of soft winter grass. It was, in typical understatement, “a hellova job.”

By the time spring turns to summer the winter grass will be killed off by the sun and the normal grass will return naturally. “Or, at least we hope so!” said Centurion’s Hilbert Smith. That’s the point about their job – you can never be 100 percent certain about anything. It’s an organic business, not a factory. As many confirmed to me, even when you prepare a pitch the same way for 10 years you can never be completely certain that it will play the same way each time.

What was especially impressive was the way they discussed costs – treating their union’s money and CSA’s as if it was their own. A recent ICC edict decreed that every single ground which mighthost an international match must have its own permanent water-sucking Super-Sopper. The Groundsmen sought a quote from Australia for 10, top-of-the –range models and were appalled to be told they were R500,000 EACH – before shipping and tax.

Most of those which CSA purchased for the 2003 World Cup were in a sorry state, some deemed beyong repair. There’s nothing an artisan enjoys more than a challenge.

A mechanical engineer was located in Vanderbijlpark who said he would not just recondition but rebuild all 11, including updated mechanisation of the hydraulic systems – for a fraction of the price of the Aussie machines. And first fruits of his labour have already been delivered to SA’s major Test grounds with more to follow.

As the video of the first rebuilt SA-made machine in action came to an end, a warm feeling of satisfaction was obvious in the room. “Now we just need to come up with a name for her,” said CSA’s Operations Manager, Mike Gajja. The silence lasted two or three seconds before the voice came from the back of the room. 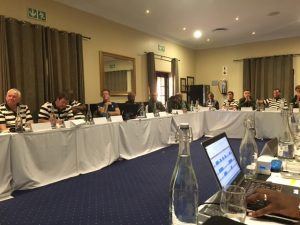 Subscribe to my Tour Diaries and Columns!Stay up to date with where I am and what I'm up to.