As I write this we have just completed our preparation for the ‘Qualifier’ match against Delhi Capitals this evening. A second bite of the cherry courtesy of the top-two place on the league table. Obviously we would have preferred to be sitting in Hyderabad waiting for whoever our opponents would be in the final, but losing to Mumbai meant we had another flight, another hotel and another match. A knock out.

The Chennai pitch has been unpredictable this year. In the early matches it looked like “win the toss, bowl first and win the match” – but it changed as the tournament has progressed and the chase became more comfortable. Perhaps, in hindsight, we should have bowled first against Mumbai but the thinking behind our decision to bat first was sound and backed up by as much information and data we could acquire. It’s always a tough call when you are not sure how a pitch will play. Nonetheless, we could have defended 131 if a couple of the ‘marginals’ and some good fortune had come our way. But it was a below-par score, we all agreed on that. Somewhere between 10 and 20 runs short. As usual the batting coach thought 10 runs while the bowling coach thought 20 runs. Healthy debate!

A thick edge off Suryarkumar Yadav’s bat flew just wide of Imran Tahir at a short third man. If that had gone to hand they would have been three-down inside the power-play facing a very different looking run chase. Having said that, he did give us a second chance in the fifth over when Vijay couldn’t hold onto a tough catch at mid on. Again, three wickets down at that point and we were right in the match. As it turned out, he played an extremely mature knock and the win was achieved with ease.

The disappointment was palpable in the change room after the match. The team talk was about the importance of attitude and facing up to the challenges, emotional and physical, that losing has presented us with in the coming days. Besides needing to win the Qualifier, there may be some energy sapping days ahead. Late to bed after the match and an early wake-up to fly to Visakhapatnam. We left the hotel in Chennai at 09h45 for the airport and didn’t arrive in Visakuntil 6:45 in the evening. It is difficult to explain the chaos and pandemonium as the team moves through an airport, especially Chennai – and usually courtesy of the presence of MS. Usually we are ushered through check-in and away from the public but that means waiting at the gate to board first. There is not always time for a lounge and, as the picture shows, the tired bodies are making the most of the surroundings.

Throughout the nine hours of traveling, which included a two-hour stop in Hyderabad, I tried to stay abreast of the voting news back in South Africa. Unfortunately I did not manage to use my ‘special vote’ last week because I could only do it in Delhi. Visak is on the east coast of India 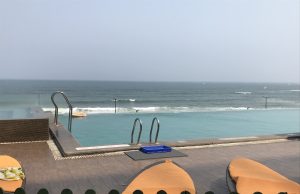 and our hotel is on the beach road with an infinity pool that provides amazing views, but I would still prefer to be in Hyderabad, the venue for the final. As last year’s champions the venue should have been Chennai but the problem with the stands, which I discussed in an earlier mail, meant the venue was given to the runners up from 2018, Sunrisers Hyderabad.

We arrived just in time to watch the eliminator match between 3rd placed Delhi Capitals and 4th placed Sunrisers which was at the same venue we are playing tonight. The winner would be our opponent tonight so there was great interest, not only in how the teams played, but how the wicket played!

One of my favourite movies from a years ago is “Sliding Doors” starring Gwyneth Paltrow. At the start of the movie she is fired from her job in London and is seen running into an underground station where she just misses her train. In a parallel version of the film, she just catches the train before it leaves the platform. I won’t ruin the outcome for you in case you haven’t seen it, but it was fuel to my fascination with the ‘parallel universe’.

In our parallel universe, Mumbai – as the winners of the Qualifier – would have woken at their leisure on Wednesday morning. A late breakfast. Coach Mahela Jayawardene would definitely have had a late round of golf while the others relaxed around the hotel. They would make a relaxed decision about when they traveled to Hyderabad and what days they would practice there. Another round of golf on the cards for Mahela is a definite. Winning the Qualifier definitely has its advantages but the dye is cast, we missed the train and we know our challenge.

Tonight is our first MUST WIN match of the tournament and I do feel confident that we will be in Hyderabad on Sunday. By the time you read this you will probably know whether my feelings were correct.