Long gone are the days when cricketers quietly went about their business and hoped to ‘catch the eye’ of somebody influential. These days you do everything in your power to sell your wares to the highest bidder.

‘Old boy’ networks and the ‘buddy system’ are still working well as evidenced by the high percentage of Australian coaches in charge of IPL teams and the resultant contracts which have been awarded to no-name Aussie cricketers like Rob Quiney, George Bailey, Moises Henriques and Kylie Minogue. Just kidding about the last one.

But for the most part these days, an agent sells a cricketer to the highest bidder in as ruthless as manner as soccer agents have been doing for decades. Once a cricketer reaches a certain level, usually after significant international exposure, then he will be sold as a hired gun – auctioned as lucratively as a good stud horse.

This winter is South Africa’s quietest for over a decade and there are a lot of good cricketers hoping to earn a few pounds rather than stay at home and gain a few. Established Franchise cricketers are happy to play for Upper Piddleton CC in the West Shropshire Evening League – at one end of the scale.
At the other, a good number of the Proteas squad are seeking employment with county contracts immediately after the T20 World Cup. Some will, hopefully, take the last opportunity of their careers to have a meaningful break and allow their creaking bodies to recover completely before the roadshow gets moving once again with the ICC Champions Trophy in September.

One man who obviously isn’t feeling particularly sore or tired is Dale Steyn who sought, and was given permission by CSA, to seek a short-term contract with a county for the month of July. I know this because an email ‘pinged’ into my inbox advertising his services! (It was forwarded by one of the counties who thought I’d be interested.)

So, for the sake on interest only – this is how an agent might go about ‘advertising’ the services of the best fast bowler in the world!

will be available to play County Cricket in 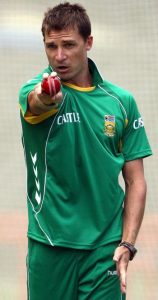 Dale Steyn’s rise to national selection has been rapid, being picked in the side for the first Test against England in December 2004 little more than a season after making his first-class debut. A genuinely fast bowler, who moves the ball away from right-handers, Steyn sprints to the wicket and hurls the ball down with aggression.

He had a good stint with Warwickshire in 2007, topping the wickets table in the limited overs games with 16 wickets. He was the dominant force behind South Africa’s home series wins against New Zealand and West Indies, picking up 40 wickets in five Tests. He followed it up with 14 in two Tests on the tour of Bangladesh, picking up three consecutive Man-of the-Series awards. He also went past Allan Donald’s record of the quickest South African to 100 Test wickets.

In September 2008, Steyn was named the ICC’s Test Player of the Year, taking 86 wickets at an average of just 18.10 in the 14 Test matches he played during the period in consideration. He capped off an remarkable 2008, during which he finished as the leading Test wicket-taker, with a Man-of-the-Match performance – ten wickets and an equally-vital first-innings 76 – in the Boxing Day Test in Melbourne, helping South Africa to an unassailable 2-0 lead and their first Test series triumph in Australia.

« IPL does the right thing
Citi Moments in the DLF IPL »