The first time I visited Lilfordia School 80 kilometres outside Harare was over 20 years ago. It was before Alistair Campbell had become Zimbabwe’s national cricket captain but soon after the country had been granted test status.

It was founded by Campbell’s grandfather over a century ago as a place of learning for ‘country’ kids – sons and daughters of farmers who had neither the means nor the inclination to send their under-13-year-old offspring to boarding schools in Harare or Bulawayo. It started with just two small buildings and 20 or so pupils.

Since then it has expanded to over 300 young pupils among an expanse of facilities which are the envy of many senior schools. Ironically, it is now a boarding school itself and has become the preferred destination for city dwellers to send their kids away from the stresses of urban life.

Each year the national team play an exhibition match against a team of ‘All Stars’, including former national players and whatever other ‘celebrities’ happen to be close by.

Although cricket, rugby, hockey, swimming, tennis and netball are all offered on the curriculum, the school is particularly proud of its cross-country reputation and the children can be seen lapping the beautiful grounds of the school, bare feet pounding the red, clay soil at least twice a week. 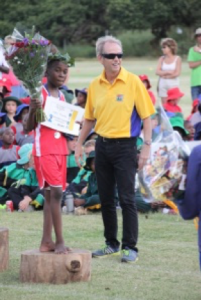 The cross-country trophy is named the ‘Bruce Fordyce Cup.’ It is the most prestigious and coveted sports prize.

Last year, while the steaks sizzled on the braai and I sipped a convivial beer with Alistair and his brother Donald, who is maintaining the proud family history as headmaster of Lilfordia, I asked about the connection between Fordyce and the school.

“Absolutely none,” replied Donald. “He is a hero to all the kids here – they are all taught about his records and achievements – but he’s never been here. None of us have met him.”

When I mentioned that Fordyce is one of the most relaxed, down-to-earth sports heroes I have ever met, Donald wondered, whimsically but aloud, whether he would ever consider visiting their little Prep School in the middle of the Zimbabwean countryside to do prize-giving.

Small world that it is, I explained that Bruce still runs socially on a regular basis in Johannesburg in the same small club to which my sister belongs. From time to time, I join them when visiting from Cape Town. I said I would mention it, but that he was, naturally, a busy man.

When I extended the invitation to Bruce, he explained that he would be in Australia at the time of Lilfordia’s annual sports prize-giving and would not be able to make it. But he said he was flattered and honoured to be such a big part of a school’s history – especially as he had no idea about it. That was the last I heard of it.

Until a couple of days ago when an email from Donald arrived containing these images. “He was incredible – what an extraordinary man. We were all so humbled to meet him, he was fantastic with the kids and there were a few tears among the staff. It was a day none of us will ever forget,” said Donald.